Put Some Heart Into It 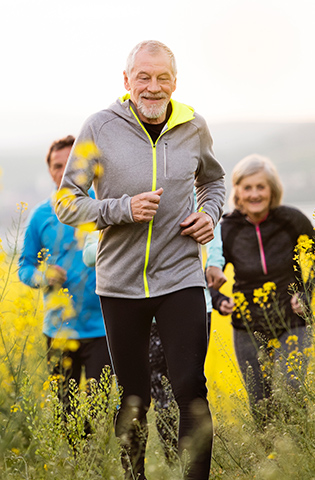 Put Some Heart Into It

Patients who’ve had open-heart surgery are usually eager to have a more active life after recovery. And some are like Keenan Adcock, who had some very specific goals in mind.

Adcock, a 51-year-old resident of American Fork, Utah, underwent an aortic valve replacement as a patient at Timpanogos Regional Hospital in nearby Orem. Prior to his surgery, he’d done some hiking around the Timpanogos Cave National Monument, where he heard about the 100 Hikes Club. The brainchild of the National Park Service as it celebrated its centennial, the club challenged hikers to complete 100 walks up to the cave before it closed for the year. Those who did so would get a free jacket — and Adcock wanted that jacket.

He let his surgeon, Dr. Gilbert Schorlemmer, in on the plan, and got some cautious encouragement. Dr. Schorlemmer told him to take his time early on, and build up endurance. Even though he was younger than many heart-surgery patients, it’s still a major procedure and his body was still healing. Not to mention that the walk up to the cave isn’t easy: The 1.5-mile trail ascends 1,000 feet, and falling rocks can be a concern.

Stepping back into healthy habits
Still, cardiovascular exercise that won’t damage the rest of the body is needed post-surgery, and walking is a solid option. Adcock began hitting the trail when he wasn’t at his Salt Lake Community College job, often logging five hikes in a single day. The first time he went up it took him 80 minutes, and “I was huffing and puffing every turn,” he says. By the time of his 100th climb, he could do it in a half hour, greeting every hiker along the way and calling out to rangers by their first names.

And waiting at the bottom of that 100th trip was Dr. Schorlemmer with the promised jacket.

“He’d been progressively limited by his valve disease, and got to a point where he couldn’t do the things he wanted to do. He did well with his valve replacement, and so when he saw me about a month afterwards and said he wanted to work out I said no lifting, but he could walk as much as he liked. He asked if he could hike up to the cave, and I told him he could work up to it. He did just that, and progressively got better. He was bound and determined he was going to get that jacket, and that hike is not for the faint of heart. I told him about the only way I could make the hike was if he carried me up there! He is testimony of what a successful valve replacement can give you in terms of better health, and a shining example of what I hope all our patients strive for.”

Who We Work For

While some would say they work for a company, a boss or even a pa…