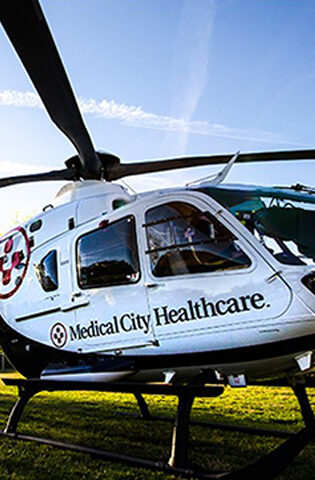 This is the second story in a two-part series. You can read the first story here .

When Hurricane Ida made landfall on Sunday, Aug. 29, it was a Category 4 storm, with sustained winds of more than 130 miles an hour and gusts of up to 150. The hurricane caused more than $75 billion in damage — the fifth-costliest tropical storm in U.S. history — and resulted in 115 fatalities.

The airlift of nearly 40 patients from HCA Healthcare’s Tulane Lakeside Hospital in Metairie, La., to outlying facilities was a remarkable exercise in compassion, coordination and communication, orchestrated by dozens and dozens of colleagues.

Here’s how it happened.

“There was no power anywhere,” says Chris Wallace, a flight nurse with HCA Healthcare in Houston. “There were lines probably 3 or 4 miles long at gas stations. Roofs were just ripped off; trees were down, power lines out. [New Orleans] was devastated. It’s eye opening to see that kind of devastation.”

According to Andy Blanchard, facility manager at Tulane Medical Center’s downtown campus in New Orleans, shortly after the storm made landfall at the Tulane Lakeside campus, the facility’s backup generators kicked in, but water damage and flooding were significant challenges.

“We had probably 40 rooms that were inundated with water,” says Andy. “The wind was blowing so hard; it was just blowing the water through any seal that was open. And when that water comes in on the seventh or sixth floor, it has to go down. So then it affects the fifth floor, the fourth and so on. It felt like you couldn’t stop it until the wind changed directions.”

Communication was also severely compromised, with the loss of landlines and cell service. The critical juncture occurred when the area lost water pressure.

“When they lost water pressure, we felt that we could no longer keep the patients and the staff safe at that time,” says Andy. “The water pressure is actually our fire protection. It’s our sprinkler system. It’s our domestic water. It’s showers; it’s cooking. So the decision was made that we just needed to evacuate the patients to other hospitals in the state.”

The most vulnerable patients at Tulane Lakeside Hospital in Metairie, La. were also the youngest. Michelle Steinhardt serves as medical director of neonatology for Tulane Lakeside Hospital and Lakeview Regional Medical Center, a campus of Tulane Medical Center in Covington, La. She says the babies in the neonatal intensive care unit (NICU) were moved away from any windows. Soon, though, it became clear that they would need to be transferred to a different facility.

“With the NICU babies, the most immediate concern was the healthcare workers not having the drinking water and potable water for washing their hands, and infection risk,” says Steinhardt.

“NICU babies are very medically fragile,” she says. “We have to be careful about timing of being able to transfer them, and when they’re even potentially able to go home. The first seven days of life is their most critical stage, where they’re more susceptible to things such as brain bleeds or infections.”

Staff identified 17 babies, including 12 in the NICU, and five mothers that required transfer to Lakeview Regional Medical Center, a campus of Tulane Medical Center.

“Patients were already ready to go, loaded up — it was very quick,” says Chris. “The aircraft were staged, and we were all running in a pattern, so as soon as we picked up and left, another one was coming in for a pickup.”

“When you have babies who have been in a NICU for several days, weeks, even months, you really, really feel like they are part of your family,” says Jana Zimmerhanzel, inpatient nursing director at HCA Houston Healthcare Clear Lake in Webster, Texas. “And you get very protective of them.”

“Of course, [Lakeview Regional Medical Center, a campus of Tulane Medical Center, staff members were] there waiting to usher us in,” says Jana. “We were taking them from one home and putting them in another.”

That was exactly the plan. The arrival of the first baby “set everything into motion,” says Hiral Patel, Lakeview Regional Medical Center, a campus of Tulane Medical Center’s CEO.

“Teamwork and collaboration were at their greatest during those transports,” she says. “When we saw the Houston AirLife team land with that first baby, everyone on the ground was in complete awe of that moment, but also with such a great sense of responsibility.”

All 17 babies and the five moms were transported in less than 24 hours, without incident.

“One of the moments that was really special was when we were loading the patients up. We had an hour to get them all in their wheelchairs up the stairs, strapped in and all. We had a day shift and a night shift [working]. I turned around, and one of my night shifters was in her pajamas, helping transport the patients.”

The reception in Florida, Coyne says, was heartwarming.

“As we landed the helicopter, our HCA Healthcare colleagues from Pensacola greeted every patient with a bed. They knew their names,” says Coyne. “They told the patients, ‘Welcome to Florida.’ Some of the patients were just amazed. [They had] never been in a helicopter, and they received great care.”

Furthermore, while the Lakeside rehabilitation unit was closed, four of Coyne’s nurses went to Florida to help care for those patients and others at the Pensacola hospital.

Across the board, responders were impressed with — and thankful for — the resources that HCA Healthcare provided each facility.

Andy says dealing with the storm was a reminder of how incredibly special it is “to have a team like that around me during those times.”

“It’s very soothing to know that I have this band of brothers and sisters,” he says. “They are right there by your side, and they have your back. And it didn’t matter the title — whether it was the CEO or housekeeping and food nutrition, security — it didn’t matter. Just having them there just made you feel better.” 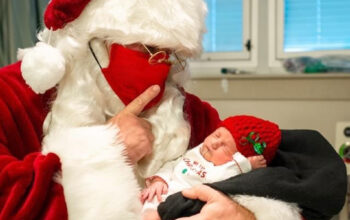 One doctor’s Christmastime visits to NICUs across Kansas City ref…