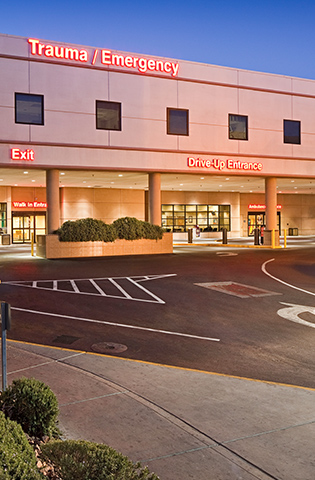 Colleagues recognized for their heroic efforts after the 2017 Las Vegas shooting.

In a crisis that brings destruction and causes severe injury, a community’s hospital is its lifeline. Understanding that role, HCA Healthcare colleagues rise to the occasion no matter how overwhelming. That was particularly true on the night of October 1, 2017, in Las Vegas, when a gunman opened fire on thousands of people attending a country music festival. Within minutes, Sunrise Hospital & Medical Center heard the news and mobilized to receive the wounded.

Every HCA Healthcare hospital practices disaster preparedness to be ready to serve patients when the worst happens. That planning has saved numerous lives over the years when areas were hit by hurricanes, flooding, wildfires and more. The Las Vegas incident was unique. Patients started arriving by the dozens, many in critical condition.

“The emergency room was ground zero for us and it was like a war zone,” recalls Sunrise CEO Todd Sklamberg. “So we had all hands on deck. Nurses, phlebotomists, housekeepers, respiratory therapists, people from all over the hospital descended into the ER, everybody focusing on their role. That’s how we were able to take care of 212 patients in one hour.”

Everyone worked together, with precision, efficiency, skill and humanity, not just in treating patients but in comforting the friends and family waiting for them. This was a tragedy of extraordinary scale, but nobody broke down at the sheer emotional enormity of what they were seeing. Instead, individuals came up with immediate solutions to handle the flood of patients, and teamwork made those on-the-fly decisions work without a hitch.

The incredible efforts of the entire Sunrise Hospital & Medical Center staff have been lauded by the patients they treated, by family members, by the city of Las Vegas and by their brethren in the medical world. In preparing for the 2017 Awards of Distinction, HCA Healthcare knew that their work should be recognized and created a special Honorary Award of Distinction. The award goes to each and every individual at Sunrise Hospital & Medical Center.

We eagerly embrace the challenges of our profession and welcome n…

The Best of HCA Healthcare