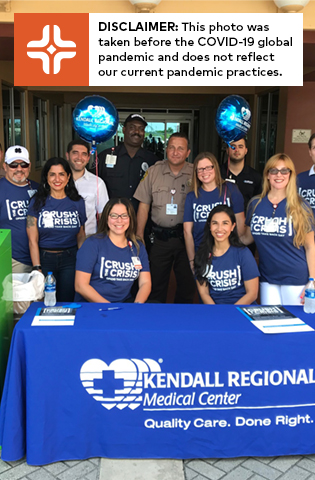 “Crush the Crisis” events will be held Saturday, Oct. 24, at participating HCA Healthcare facilities across the nation.

“From childhood to adulthood I lost people. Whether unexpected, tragically, or expected. And whether [they were] loved ones, acquaintances, or people I didn’t even know, I felt the loss deep,” says Sara. “I think I always knew I would grow up to help people, but didn’t really know what that would look like. The weekend I was supposed to move to college, I experienced a tragic loss and the very next week, I declared my major: nursing.”

Sara, who will mark her sixth year with HCA Healthcare in December, is an RN at affiliate TriStar Centennial Medical Center in Nashville, TN. She cares for orthopedic patients as a nurse navigator to joint replacement surgeon, Dr. Jeffrey Hodrick.

Another way that Sara serves others is through her work in helping to decrease the use and abuse of opioid pain medication. In 2017, Sara and Dr. Hodrick launched an opioid stewardship program consisting of an interdisciplinary team to study the prescribed use of opioids within their practice and hospital. The goal of the group was to reduce patients’ dependency on the potentially addictive opioids by identifying effective alternatives to manage pain. Furthermore, the team noted that a significant number of opioid addictions and overdose deaths are the result of individuals’ access to unused medications obtained from the medicine cabinets of family and friends.

From their work, “Crush the Crisis” was born as a grassroots, community engagement initiative with the goal of creating greater awareness of the dangers of opioid misuse, while offering current and former patients the opportunity to conveniently return expired or unused pain medication for safe and proper disposal.

The first “Crush the Crisis” opioid take-back event was held at TriStar Centennial Medical Center on Oct. 27, 2017. With the support of the Nashville Metro Police Department, the team collected approximately 21 pounds of medication which equates to more than 14,000 doses.

Over the span of just three years, Sara’s and Dr. Hodrick’s dream has spread from the hospital to the division, and in 2019 the initiative expanded nationally as 100 HCA Healthcare facilities partnered with local enforcement to host take back day events in 16 states. As a result, an astonishing 5,887 pounds of unused and expired medication — the equivalent of more than 4 million doses — were collected.

On Saturday, Oct. 24, HCA Healthcare facilities across the nation will once again partner with local law enforcement agencies to host “Crush the Crisis” opioid take-back events. This year, the event will align with National Prescription Drug Take Back Day, sponsored by the United States Drug Enforcement Administration (DEA).

Uniformed law enforcement officers will be on-site at each HCA Healthcare take-back location to collect unused and expired prescription medication, safely and anonymously.

Opioid misuse is a national public health crisis. According to the Centers for Disease Control and Prevention, an estimated 2 million people in the United States suffered from an opioid use disorder in 2018. That same year, 67,367 died from drug overdoses, with opioids involved in 70% of those deaths.

The opioid stewardship program led by Dr. Hodrick and Sara employs an evidence-based approach to care that ensures each patient receives effective and responsible treatment for their pain, however without the need to introduce them to the inherent risks that come with these potentially addictive medications.

Some approaches have included introducing essential oils, practicing mindfulness and shifting the focus from the numerical pain scale to one of function, which means asking the patient what they are physically able to do rather than focusing on a specific number.

“Joint-replacement surgery has traditionally been a subset of medicine that has prescribed a large number of opioids because of the pain associated with the surgery. But over the last decade or so, tremendous improvements have lessened the inflammation associated with the surgeries, thus decreasing the actual need for large amounts of opioids for extended periods of time,” Sara says.

“If we have saved even one life since this campaign began, then we have been successful. And the conversation and education surrounding this platform are as important as the actual taking back of these medications.”

She says a cultural change in mindset is needed in order to see further progress.

“When I was in nursing school, we were taught ‘pain is what the person says it is.’ If a patient was hurting, you would give them pain medication until you could get their pain level down to an acceptable number. Since then, our world has seen the devastating effects that opioids can have on people and so offering patients effective alternatives to manage their pain is critically important,” she says.

“We felt a tremendous opportunity to decrease the risk of opioid misuse in our patient population and within our community,” Sara says. “If we have saved even one life since this campaign began, then we have been successful. And the conversation and education surrounding this platform are as important as the actual taking back of these medications.”

What: “Crush the Crisis”

Colleagues and members of the public can find a nearby “Crush the Crisis” collection site here or by calling 833-582-1970.

If there is not a “Crush the Crisis” location nearby, find a local DEA take-back location on the U.S. Department of Justice Drug Enforcement Administration’s website. Search for controlled substance public disposal locations here.

Colleagues are recognized with the Frist Humanitarian Award for t…

Who We Work For

While some would say they work for a company, a boss or even a pa…