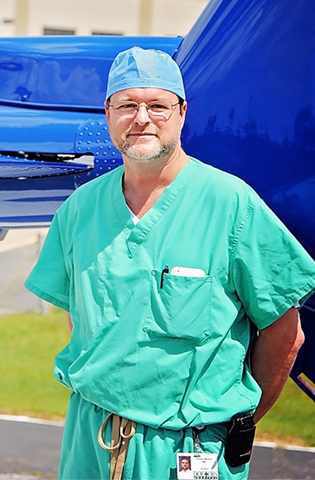 Dr. Fred Mullins was known for his visionary leadership in burn care, but those closest to him recall his humility, sense of humor and ability to relate to anyone.

Dr. Robert Fredrick “Fred” Mullins was known as a skilled surgeon, a compassionate physician and a visionary leader in burn care.

To the outside world, he was highly regarded as the medical director of the Joseph M. Still Burn Center at Doctors Hospital of Augusta in Augusta, Ga., and president of Burn and Reconstructive Centers of America (BRCA).

Those who worked closely with him recall his humility, his love of Chinese food and his sense of humor. He loved his family and was excited about the upcoming birth of his first grandchild. He also was an avid hunter and loved the outdoors. He was most comfortable in blue jeans and still used a flip phone most of the time. These are the down-to-earth traits others were so fond of; he was known for his ability to relate to anyone.

Dr. Mullins passed away unexpectedly in June at the age of 54. His office at the Joseph M. Still Burn Center, where he met with patients and families is still the way he left it, says Belinda Little, unit clerk for the burn unit. “It still feels like he’s just traveling to another burn center,” she says.

“Whether he was here or not, he always wanted it to be business as usual. Keep it going,” she says.

That’s exactly the message Dr. Mullins wanted to leave behind, said his brother Frank Mullins, who now serves as Chairman of BRCA.

“His vision for BRCA was straightforward: Build it, and continue to make it the largest and most respected name in burn, hand and wound care – not only in America, but across the globe,” Frank said. “We are still here providing world class care every day. I know he would be proud of that.”

Keith Donker, an RN at the Joseph M. Still Burn Center, has worked in burn care for more than 35 years. Dr. Mullins was a physician assistant when they met. Keith said it was the late Dr. Joe Still, the burn center’s founder, who encouraged Dr. Mullins to attend medical school.

“Joe did a lot of things that not a lot of people would see, but he would have a reason,” Keith says. “Joe was looking ahead.”

The two doctors were very similar, he says.

“Joe was much the same way as Fred. Very down to earth. A man of very few words. You kind of had to know him for him to talk to you. Fred was the same way. Fred was very much shaped and influenced by Joe,” Keith says.

He may have been quiet, but colleagues say Dr. Mullins was incredibly approachable.

“He had a love for people. He made everybody feel a part of his team.”

Dr. Mullins advanced quickly in his career, Keith says. Burn care is an extremely rare specialty, with fewer than 150 burn centers in the United States. Dr. Mullins became the center’s medical director in 2003 and led the expansion to include 16 sites of care located in nine states. His legacy includes the new burn center tower at Doctors Hospital of Augusta, part of a $75 million expansion featuring 96 inpatient beds and four additional dedicated burn ORs, which brings the center’s total to eight.

Doug Welch, president and CEO of Doctors Hospital of Augusta, described Dr. Mullins’ impact on the hospital, its community and its patients as immeasurable.

“What started in Augusta, his home, spread to hospitals across the country. In big cities and small towns, because of Dr. Mullins, burn patients received the high-quality care they deserved. He found a way to change more lives in more places,” he says.

Belinda, who has been at Doctors Hospital of Augusta as long as Keith has, says Dr. Mullins advanced the burn center to heights his predecessor couldn’t have imagined. Prior to the expansion, Dr. Mullins shared his plans with her.

“I remember him walking me outside — he showed me his vision,” she recalls.

“He was the hardest-working person in that burn center. Part of it was his work ethic; part of it was how he was raised. His idea of fun was work,” Keith says. “It was also a passion and a quest. He wanted it to be the biggest and best [burn unit] in the world.”

There’s a lot of academic research and a lot of networking involved in the burn care field, Keith says. Dr. Mullins was less focused on recognition and more focused on doing the field work.

“He never wanted to be in the spotlight, and I think that says a lot about somebody,” he says.

Belinda recalls Dr. Mullins’ love of Chinese food, which he ordered often for the unit: “He loved the rice and sesame chicken and that red sauce. And he’d say, ‘Don’t you order anything green for me. You order it for you guys.’”

She also remembers him as a prankster.

“He would do something funny, and you’d see him chuckling to himself, going down the hall,” she says.

He let people know they were doing a good job with a pat on the shoulder, a smile or a wave.

“He was a good man. A good-hearted, humble and modest man,” Belinda says. “He’s so dearly missed, but you know what? It still feels like he’s here.”

Belinda Little, Unit Clerk, recalls the day that Dr. Mullins shared his vision with her.

We invite you to join the conversation. Share your favorite photo or memory of Dr. Mullins here.