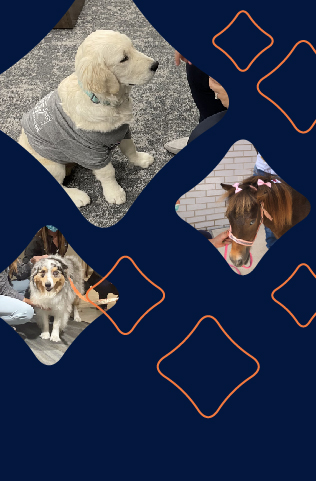 Sky, a therapy dog at TriStar Skyline Medical Center is a beloved colleague that brings joy to everyone he encounters.

The most beloved colleague at TriStar Skyline Medical Center sometimes sleeps on the job, but no one seems to mind.

He is, after all, still a puppy.

He’s known for his calm demeanor and can comfort patients by merely resting his head on their beds.

He brings so much joy to colleagues that they race to see him when he’s nearby.

Sky, an English cream-colored golden retriever, serves as a therapy dog at TriStar Skyline, located in Nashville, Tenn. He’s among several therapy animals across the organization. These colleagues have their own badges and even earn anniversary pins for their years of service.

Methodist Hospital Director of Communications, Melissa Geedman, says an encounter with the animals lifts her own spirits.

“I’ll even go out of my way to go see Major. It just makes my day so much better,” she says.

Colleagues at Methodist Hospital are proud of their animal therapy program. When therapy dogs Chanel, Lady and Fresca were deployed to El Paso, Texas, following the tragic Walmart shooting in 2019, they visited the emergency dispatch and command centers, as well as the hospital. Their work attracted national and international media coverage.

“The impact it has on our patients and staff — it’s just the most rewarding thing. And that’s exactly why we have them,” Melissa says.

These popular colleagues have brought smiles to so many: ill children, grieving parents, gift shop attendants, physicians and care teams throughout their facilities. Meet more of these animal therapy colleagues here.

I saw smiles that I had not seen in months. People who literally were in despair — and were tearful, crying, emotional and exhausted — were on the floor cuddling with this golden retriever.

It was Thanksgiving 2020, and TriStar Skyline’s CEO, Dustin Greene, was spending it without his family. They had gone to the beach, as was their family’s tradition. But it had been a tough year for healthcare workers, and Dustin didn’t feel right about leaving his staff.

“It was the first big wave of the pandemic, which was traumatic for our staff. They were traumatized. They were in despair. They were exhausted. And our patients were incredibly sick,” he recalls.

On a whim, he took their older golden retriever, Malibu, to the hospital with him to make the rounds. Malibu once served as a therapy dog and resumed the role easily.

“I saw smiles that I had not seen in months,” Dustin says. “People who literally were in despair — and were tearful, crying, emotional and exhausted — were on the floor cuddling with this golden retriever.”

Dustin began taking Malibu to the hospital intermittently after that. A few weeks later, an intensive care unit nurse alerted Dustin to a patient with a serious head injury. The teen had been in an ATV crash and had been nonverbal for longer than a week.

“He was about the same age as my son at the time, so it was particularly personal for me,” Dustin recalls.

He began talking to the patient, introducing himself and Malibu, whose chin was resting on the bed.

“This kid begins petting his head. And this young boy, he leans up, and with a very slow and almost broken speech cadence, he said, ‘Wow. Malibu has big feet.’ And literally, you could hear a pin drop in the room. And then Mom began to cry. That was a turning point in this young boy’s clinical journey.”

It was also a turning point in bringing a permanent therapy dog to TriStar Skyline. Dustin found Sky and began taking the puppy to the hospital for short visits to build his stamina. They now go to work together a few times a week. 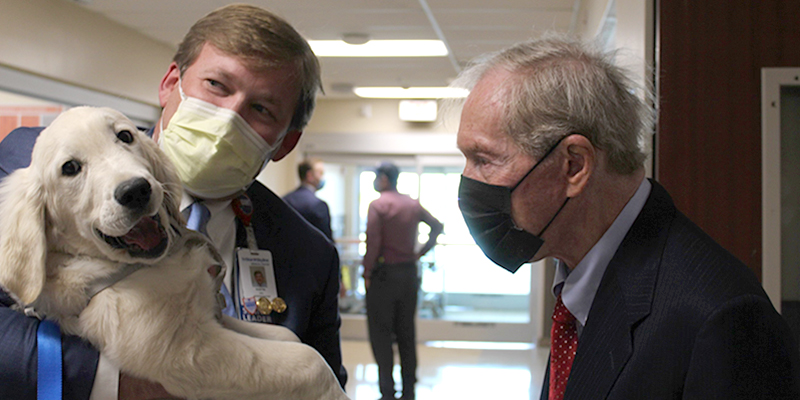 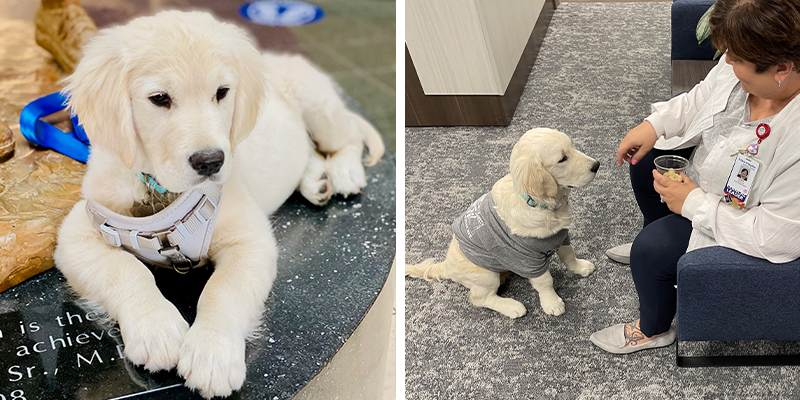 Sky enjoys lounging in the boardroom at TriStar Medical Center and receiving pets from colleagues. 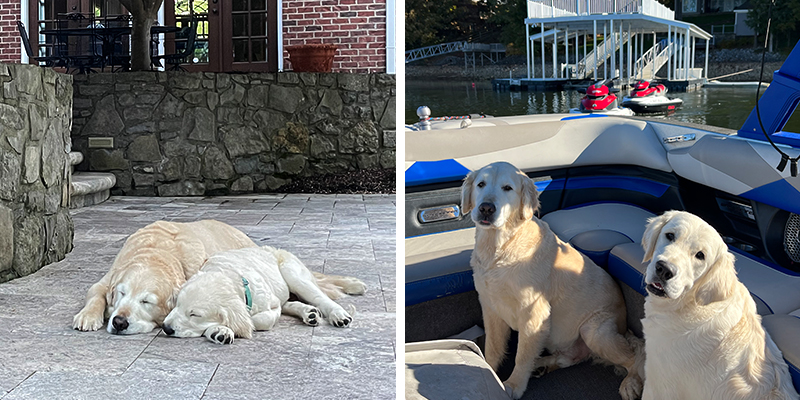 Sky and Malibu at home relaxing. 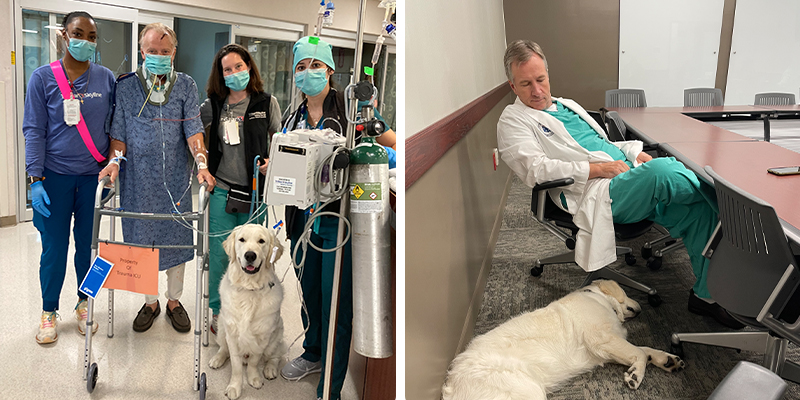 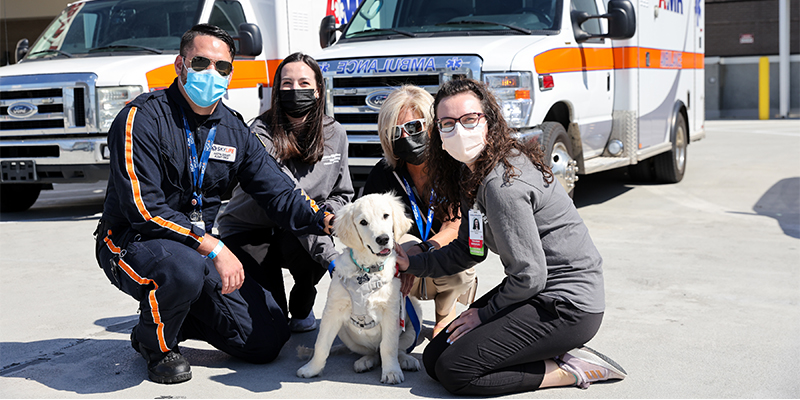 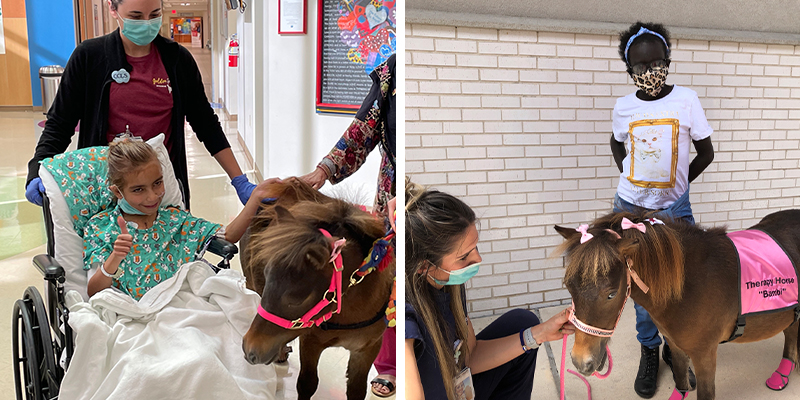 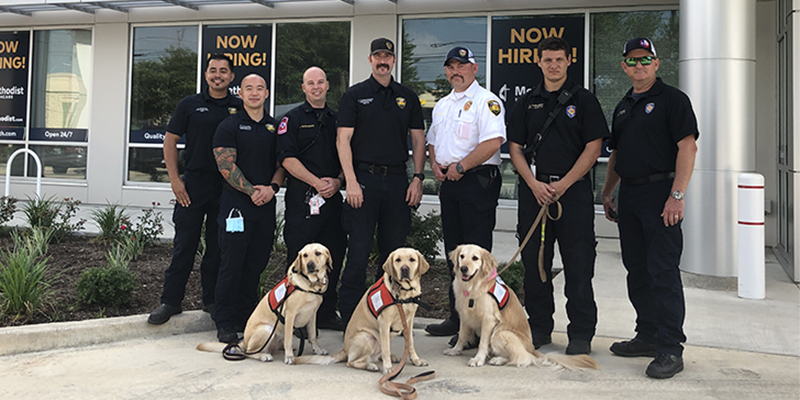 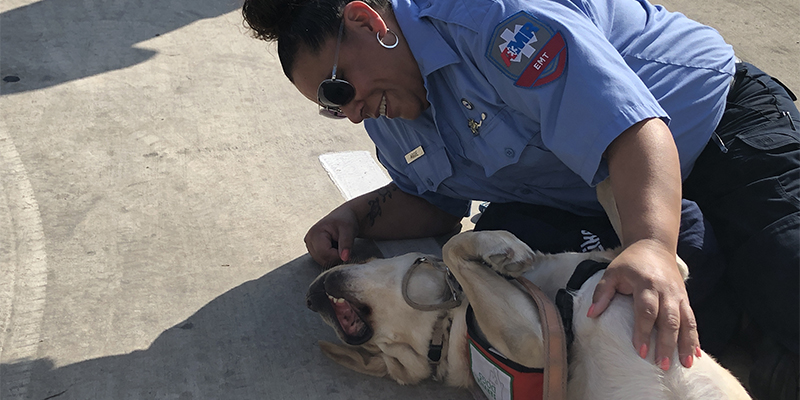 “You would not believe how much people love this dog,” he says.

Sky has an uncanny knack for identifying people who are troubled, Dustin says. There are many times when Sky rests near a colleague experiencing grief or hard times. Dustin often learns of it later when colleagues tell him about it.

Sara Howe is a certified occupational therapy assistant at TriStar Skyline and one of Sky’s handlers. She says his presence improves colleague morale, including her own. She explains that dogs don’t demand anything from you. They just want attention and affection, and people respond to that.

“People’s attitude when Sky is around, and their demeanor — they’re just happier and lighter. Everyone is very excited when he comes to the floors,” she says.

Sky’s other handler, interim Trauma Program Director Donna Nayduch, says he’s a member of her team. But sometimes serving others can wear him out too.

“He does sleep on the job,” she says with a laugh.

His arrival is often met with enthusiasm and shouts of joy throughout the hospital.

“It’s the perfect distraction. We work better when we have that momentary break where we can go see something joyful and think of something that’s peaceful and happy,” Donna says.

Sky’s presence benefits colleagues as much as patients, just as Dustin had seen with Malibu. Donna says healthcare workers need comforting too, and that adding Sky to their team was an easy way to boost their spirits.

Bambi, a therapy horse at Methodist Hospital and Methodist Children’s Hospital, is known for her colorful ribbons and sassy personality.

Three dogs and a horse.

While it’s not as unusual to see therapy dogs, a therapy horse in a hospital setting is unique. Bambi, a 4-year-old miniature horse, is the same height as some large dogs. She often wears colorful bows and is known for her sassy personality. She is the first hospital-based therapy horse in Texas. Bambi was trained to provide emotional support in healthcare settings. She joins Hazel, Jaime and Major, three vanilla latte-colored therapy dogs — all with their own specific roles. Hazel and Jaime were the first therapy animals to serve at the children’s hospital. Major joined the team last year and mostly visits ICUs. Since his arrival, though, colleagues at Methodist Hospital have also found him therapeutic.

Melissa Geedman, Methodist Hospital’s Director of Communications, says they acquired Bambi because they wanted to expand their program services: “We looked out of the box a little bit and said, ‘We have all these amazing dogs — what about a horse?’”

Bambi visits both hospitals, serving adults and children. Off the clock, Bambi lives on a ranch with her handler, who is also a Methodist Hospital colleague.

“She’s just been a wonderful addition to our facility animal program,” Melissa says.

Meeting a horse in a hospital can turn a day around for a patient or caregiver.

“When you bring one of our facility animals into the room, their faces just light up,” Melissa says. “Patients really seem to take to animals in a way that they may naturally not take to humans. They can just love on these animals. These animals love them back. They just seem to be what a patient needs in that moment.”

A therapy animal can provide comfort without words, which is sometimes exactly what a patient or their family needs, she adds.

“Patients are sometimes going through their journey alone … when patients receive their diagnoses, that’s sometimes very hard to process. And so just to be able to put that emotion or that anxiety aside for a couple of moments and to focus on something positive and uplifting — you just see a lift in spirits and overall mood,” she says. “And the same goes for families who are having to cope through some of these difficult diagnoses with their loved ones. They’re going through different difficulties than the patients or the staff. So just providing a moment to pause to have a sense of calm is what the primary goal of this is — to be there during some challenging times.”

When you bring one of our facility animals into the room, their faces just light up. Patients really seem to take to animals in a way that they may naturally not take to humans. They can just love on these animals. These animals love them back.

Out in the field, Chanel, Lady and Fresca provide solace to first responders. Brandon Miller, a division colleague with Methodist Healthcare, serves as Chanel’s handler. Colleague Frankie Trifilio works with Lady, and colleague Jason Miller is teamed with Fresca.

They serve as EMS relations managers, along with their dogs. Brandon says they help first responders, who are often overlooked when it comes to mental health.

“We help with a process called critical incidents stress management; when fire departments or EMS agencies go out on really bad calls, we take the dogs, and we can let the dogs kind of just walk around, be loved on, do their thing,” he says. “It gives us a chance to talk about stress management techniques and things like that. A lot of times when you start talking about stress management with firefighters and paramedics, there’s a lot of stigma around asking for help. But sometimes when somebody’s just sitting there petting the dog and playing with them, they’re listening to you. And it’s kind of an open forum to talk about those things.”

When their team—Chanel, Lady and Fresca—was sent to El Paso, Texas, after the Walmart shootings, they sometimes logged 16-hour days. They spent time with law enforcement officers working on the ground at Walmart, and at the local fire department.

Brandon has dedicated most of his career to EMS and knows firsthand about the challenges first responders face.

“Stress management has always been something that I’ve worked with, with EMS and Fire for a long time. I just saw this as a different avenue for it … we know that when our staff is doing well mentally, they spread better patient care,” he says. 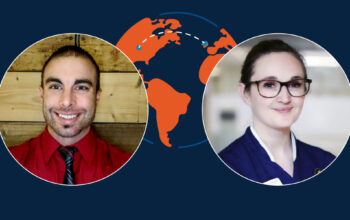 “What if?” is a question the company has encouraged its employees…