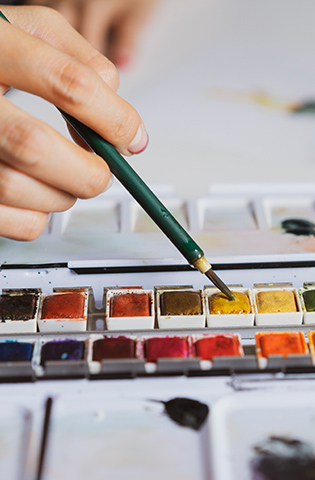 How The Breast Center at St. David’s Medical Center used art to showcase their 20 years of service to women

When it marked 20 years of service to women in Central Texas last fall, The Breast Center at St. David’s Medical Center wanted to do something that looked back at its successful past and gave hope to those who would be coming through its doors in the future.

“People were very excited and involved in the event, and we wanted to do something that would capitalize on that,” Sawyer said. “The idea of a painting came from wanting an activity where everyone could get involved. We had surgeons, ultrasound techs, directors and patients participate — everyone was able to pick up a brush if they wanted.”

Creating a tangible piece of art meant a lot to many of the women who attended, added Brenda Baumann, RN, MSN, Director of The Breast Center.

Art as History and Therapy

“It was meaningful to the breast cancer survivors,” Baumann said. “It provided a visual means of expression, but also an outlet for some. I think a few left with plans to continue artistic expression as a form of therapy on their journey towards healing and wellness. It was a positive experience for staff and the public.”

Some people chose to write out a message, while others painted symbols or just abstract squiggles. There were a few “girl power” notations, as well as dates of employment, or how long someone has been cancer-free. Since its opening in 1992, the center has diagnosed and treated nearly 5,000 women for breast cancer.

At the center’s 20th anniversary celebration, the blank canvas held a place of pride near a dessert buffet located at the end of a facility tour. The idea was to represent a celebration at the end of a patient’s journey, but even with all the good feelings it still took a little ice-breaking to get the crowd’s inner artist released.

“We had this big, blank canvas, and a sign encouraging people to put on an apron, get some paint and a brush, and paint away,” Sawyer said. “But everyone was a little bit shy, so I painted a big pink ribbon in the middle. After that, people were eager to join in.” 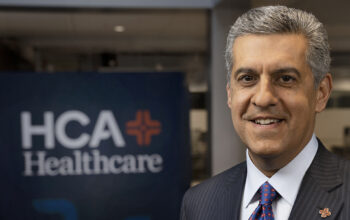 In this issue of HCA Healthcare Magazine, we reflect on the past…