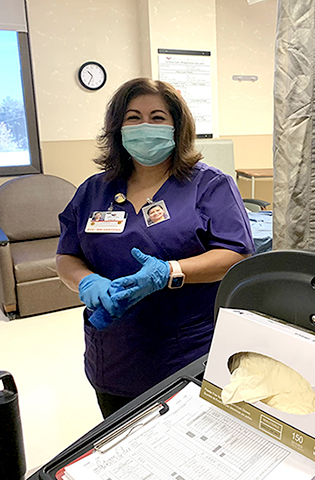 “I never thought an EVS employee could be up on that award wall, much less me.”

“I have never gotten recognition like this ― ever. When I started on the night shift, I cleaned the lobby first and when I would dust the award wall, I would pray and say, ‘Lord, I know an EVS (colleague) can do it.’”

Irene Salazar had an established career as a cosmetologist when she put it on hold to care for her husband when he had a stroke. She was his caregiver until he was well enough to return to work. But instead of returning to her former career, she joined the environmental services team as a housekeeper at West Valley Medical Center in Caldwell, Idaho.

Since assuming this new role two years ago, she’s come to love it for many of the same reasons she enjoyed her previous work: people.

“I have a service-oriented heart,” says Irene, an active church member who tries to model her Christian faith. “It’s not just housekeeping. It’s not just a job. It just blesses me that I get to go around and say, ‘Good morning. Good morning. How are you?’ I get to bring love and joy to people, and they delight in it.”

From the start, Irene noticed the lobby wall that held photos of  West Valley colleagues recognized for demonstrating a commitment to a positive workplace culture. She imagined her own photo on the wall. Now her dream has come true.

“I couldn’t believe it. I was shocked. I have never gotten recognition like this — ever,” she says. “When I started on the night shift, I cleaned the lobby first and when I would dust the award wall, I would pray and say, ‘Lord, I know an EVS (colleague) can do it.’”

Her supervisor, Carlos Vazquez, says, “When I first met Irene, she was that type of person who made you feel like your mom was there. She was able to jump in and take care of everything and we have seen that continue to blossom. She rises to the occasion every single day.”

Irene says the most rewarding aspect of her job is when she gets to interact with patients in their rooms.

“They ask me to pray with them. They want hugs or just to be listened to. During COVID-19, they couldn’t have visitors, so they were so happy to see me,” she says. “Even on my lunch break, I would go back and visit with them because they were really missing family. Here at West Valley, we always say ‘Care like family.’ For me, that’s the highlight of my day, to see patients. Honestly, that’s why I’m here. I love it.”

Carlos says that Irene’s warmth and dedication is in demand throughout the hospital.

“Throughout COVID-19 she is one of those people who has kept things together for our team. Oftentimes, people come and praise our team for her efforts. She was helping out in the ICU recently and the nurses and physicians said they loved her and wanted her moved to their area,” says Carlos. “Irene is assigned to the behavioral health unit and checks all public areas such as restrooms and lobbies, but she is so invested we don’t even classify that as ‘her area’ ― the whole hospital is her area.”

“She would frequently sit and pray with COVID-19 patients who were in MICU or med/surg before they went on the ventilator. She had that opportunity to be with those patients and often comforted them before they went back or they were alone.”

An additional unexpected outcome of her career switch came in the form of emotional healing. The heavy burden of caring for her ill husband and the loss of her job as a cosmetologist were very difficult, and Irene found herself struggling with depression. When she began working at West Valley two years ago, she was assigned to the hospital’s mental health unit where she at first felt challenged, but where she soon found a sense of support.

“It was the hardest thing for me to see – but I had to. I couldn’t let it become my crutch,” she says. “I’m actually finding the freedom to speak about my depression because I was embarrassed about it. But I’m overcoming that.”

Irene also tries to inspire her fellow colleagues through leading by example.

“I always tell them, look for the opportunities that you’re missing. It’s not just a job,” she says. “I’m a housekeeper, but I understand how important it is that everything is clean and sanitized for patients. I really tell them how much it means to me that I get to clean their rooms.” 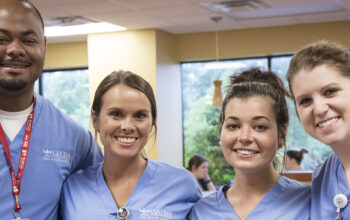