With Gratitude: Communities Show Their Support During Pandemic 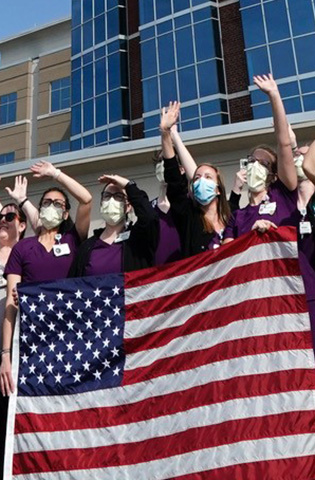 With Gratitude: Communities Show Their Support During Pandemic

HCA Healthcare thanks the volunteers and community members who continue to support and encourage our frontline colleagues.

As the COVID-19 pandemic moved across the nation, our HCA Healthcare colleagues never wavered, rising up to face adversity head on for the sake of our patients and communities. To express appreciation for the commitment and sacrifice of our caregivers on the front lines of the pandemic, volunteers throughout the many communities we serve came together to show their gratitude. From donating meals to lifting spirits with a song or just a kind word, these communities rallied around our HCA Healthcare colleagues — and we say thanks to everyone who donated their time and talents. Here are just a few of the ways our communities showed their support.

In April, colleagues at TriStar Summit Medical Center in Hermitage, Tenn., were treated to dinner from Nashville’s Loveless Cafe by former NFL quarterback Peyton Manning. The football legend said he wanted to thank healthcare workers who were “demonstrating great courage and commitment and making great personal sacrifices to care for the sick during this national crisis.”

It makes our colleagues feel special knowing that people outside the hospital care about them and everybody is doing their part in different ways.

In May, some 20 performers staged a virtual concert hosted on Facebook. “With Gratitude: A Virtual Concert Honoring HCA Healthcare Colleagues” featured well-known artists such as Brad Paisley, Shania Twain and Jewel, along with up-and-comer Lauren Mascitti. In addition to competing on “American Idol” earlier in 2020, Mascitti also works as an RN at TriStar Horizon Medical Center in Dickson, Tenn.

On April 17, the New York Stock Exchange’s chief of Building Engineering Operations, Robert Glorioso, rang the closing bell in honor of nurse Baylie Mader of Tulane Medical Center in New Orleans. The selfie of her tired, post-shift face had already gone viral when the NYSE recognized her as part of its #Gratitude campaign.

In HCA Healthcare communities all across the nation, people showed their support for colleagues by placing signs in their yards, gathering outside healthcare facilities with handmade posters, and even writing heartfelt notes for doctors and nurses. Colleagues at Lone Peak Hospital in Draper, Utah, were especially grateful for handwritten notes from local schoolchildren. 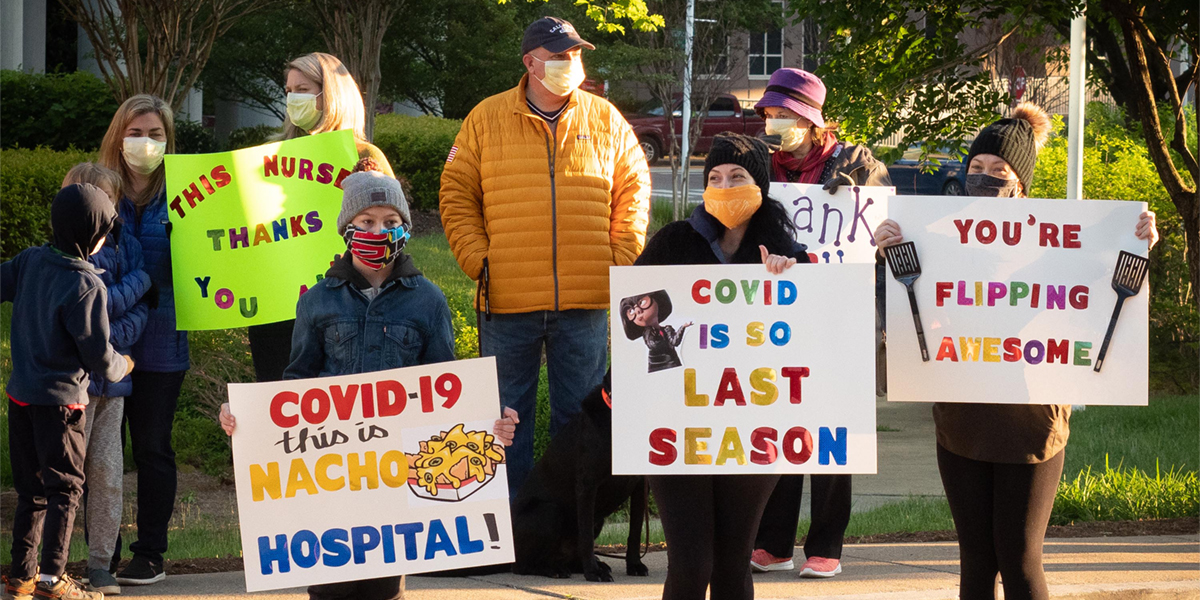 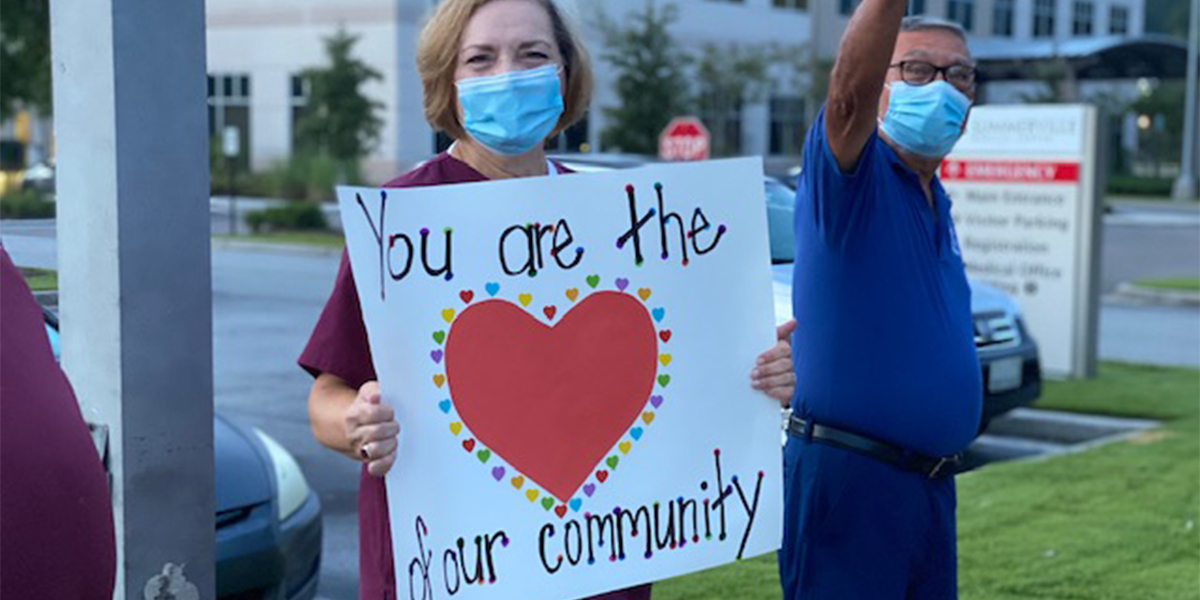 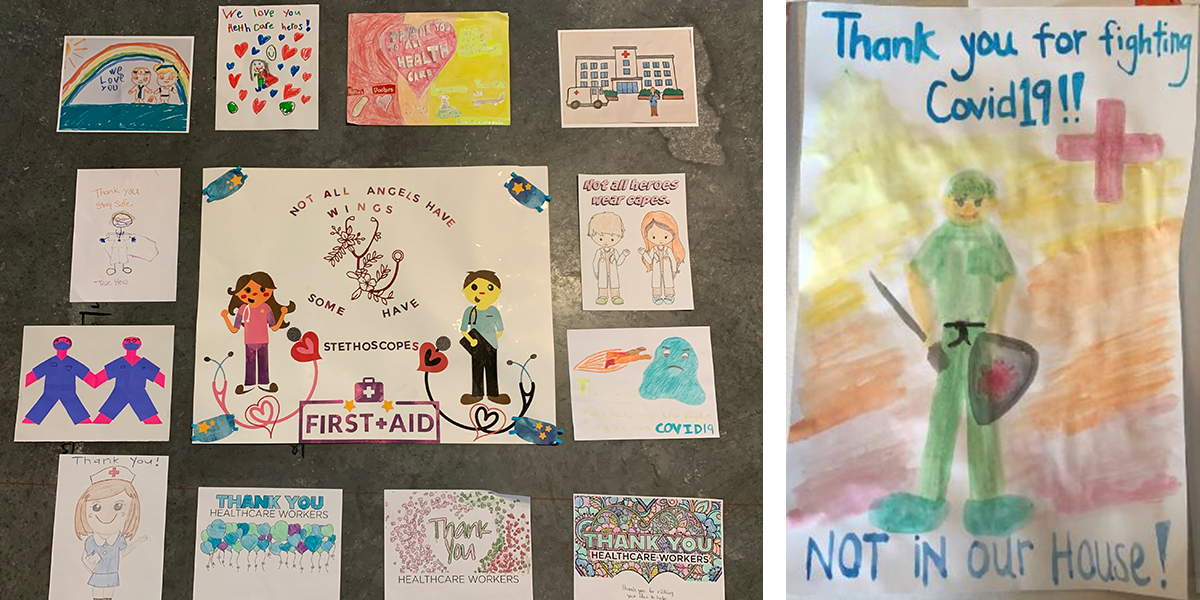 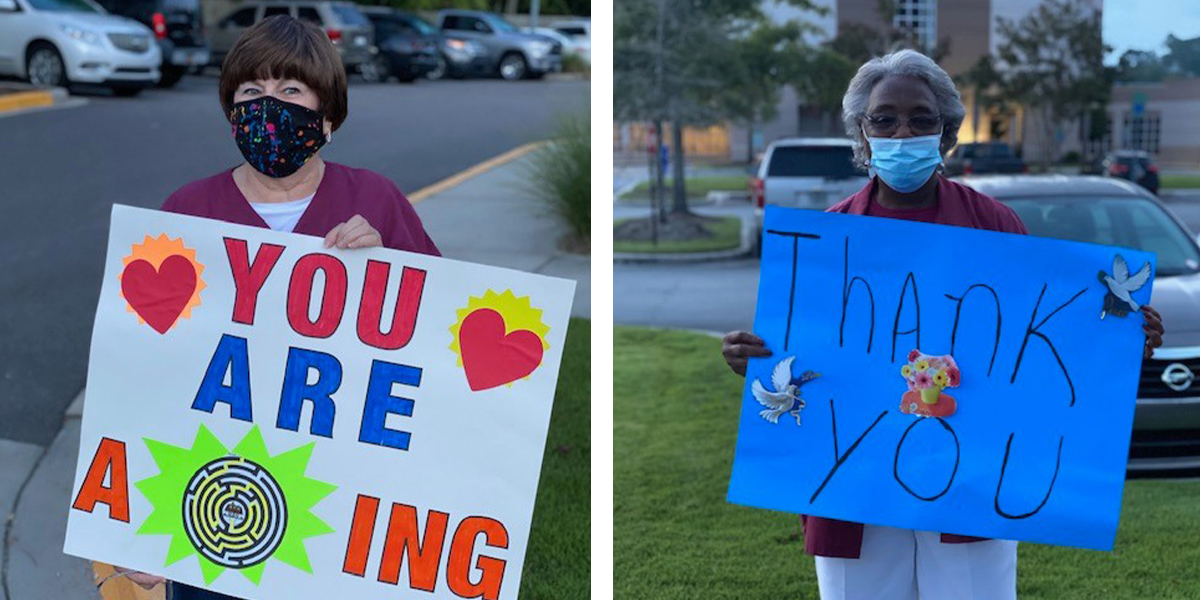 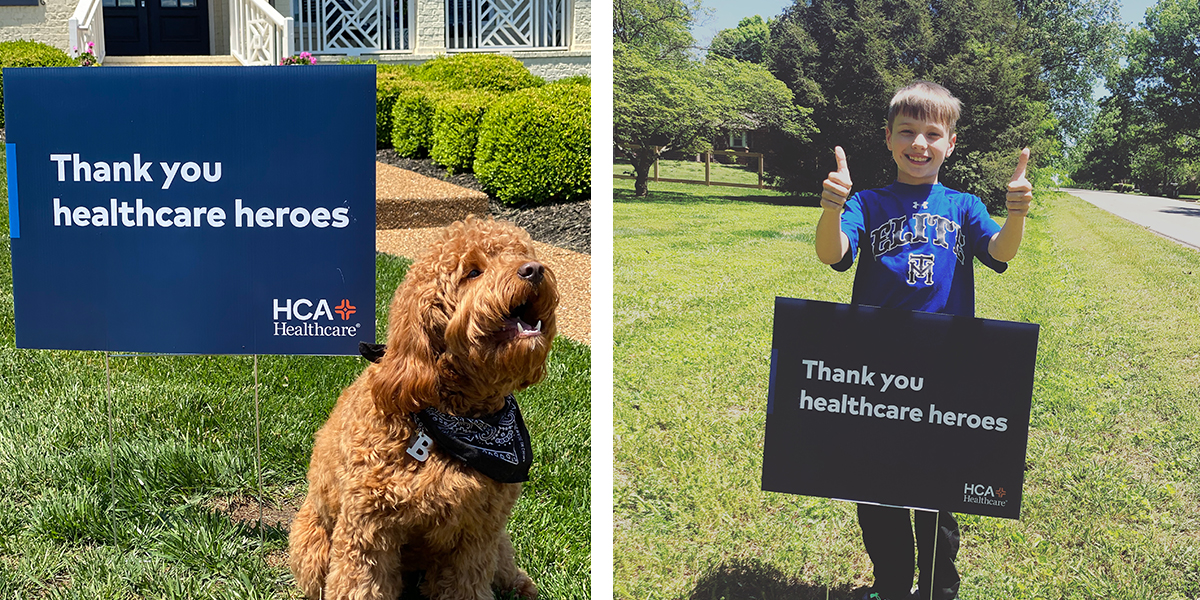 In March, colleagues at Poinciana Medical Center in Kissimmee, Fla., were treated to a serenade of car horns and flashing headlights. More than 100 cars gathered in the parking lot to show their appreciation for those working on the front lines of the COVID-19 pandemic.

Longtime hospital volunteer Ruth Batts helped Fawcett Memorial Hospital in Port Charlotte, Fla., launch the Sunshine Calls program. Consenting patients can receive a call from a hospital volunteer — a friendly check-in to see how they’re doing, if they need anything or just want to talk.

In July, local artists donated their work to HCA Houston Healthcare, through a partnership with the Bayou City Art Festival known as HeART for Heroes. The stunning visuals—displayed at seven HCA Healthcare facilities in Houston — are meant to spread joy, provide comfort and show appreciation for local healthcare heroes.

In July, pop artist Lizzo treated colleagues in the emergency room at Tulane Medical Center in New Orleans to lunch — and recorded a special note of gratitude.

Thank you so, so much for everything that you all have been doing to keep us safe during this pandemic. … We see you. We appreciate you. You are the true heroes of this generation.

In April, chocolatier Godiva sent gratitude to HCA Healthcare hospitals nationwide by sharing sweet treats with colleagues. Jen Berres, senior vice president and chief human resource officer at HCA Healthcare responded: “We are so appreciative of the gracious donations from Godiva and the message it sends our colleagues — that the world is holding them in their hearts.”

In this issue of HCA Healthcare Magazine, we reflect on the past…